The Goose is Back – Long Live Tradition

Goose, the most traditional of Christmas poultry, is regaining its place on more and more festive dinner tables. It’s not difficult to see why.

People are becoming much more discerning as to the origins of the meat they buy, and British geese reared naturally on pasture and sometimes corn stubble have an obvious appeal. The rediscovery of our national heritage and customs is also playing a part in this move back to tradition.

Through the centuries the goose held pride of place on British tables at times of festivity and celebration. Apart from the flavour and texture of its meat, the goose has been a source of other valued benefits that added to its esteem. 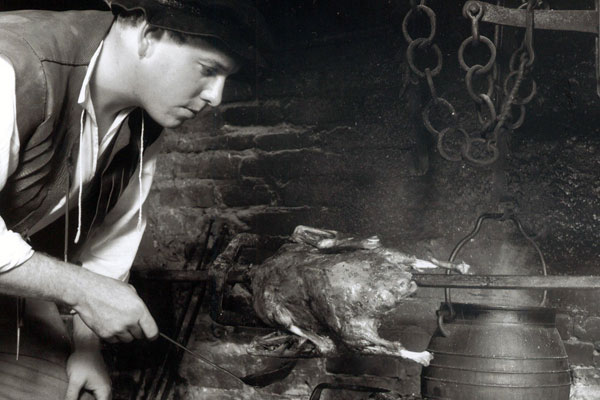 It is no surprise that goose meat is so highly prized through time. The meat has a different succulence and texture, more intense than other poultry so you don’t need large portions.

The fat is an essential part of the appeal. It is a much softer fat than found in red meat, with a higher proportion of the more desirable mono-unsaturated fatty acids. Top chefs love to use it in cooking, and jars of goose fat sell well in delicatessens and nowadays too in supermarkets.

Goose Through The Ages

Before the seizure of most common land under the various Enclosure Acts, small communities would invest in flocks of geese and graze them on open spaces within each parish. The benefits were obvious – eggs, feathers, down, quills, medicinal uses for its fat – but chiefly they were valued for their meat.

Many English customs and traditions, especially at Michaelmas (September 29), were celebrated by feasting on goose whose meat was always regarded as superior to other poultry.

In Victorian times, Goose Clubs flourished with members making payments throughout the year. The Sherlock Holmes short story ‘The Adventure of the Blue Carbuncle’ describes the working of one of these clubs in great detail.

Autumn – Season of the Goose

Because it is reared naturally, fresh goose has a limited season between September and the end of the year. But with demand in many areas now outstripping supply, people in the know will always place their Christmas order early, as after all, to savour goose meat is to revive a great British tradition.

From Quills to Duvets… and Arrows

Goose quills were used for writing until the late 19th century. Feathers and down are still much prized today for bedding. Although from earliest times most people made beds from crude mattresses stuffed with straw, bracken or horse hair, the favoured few would use goose feathers, often mixed with down, to form the softest possible bedding. Today they are regarded as the best choice stocked by many top stores.

In the field of warfare the goose has made a remarkable contribution to British culture. Our only indigenous goose is the greylag and it was from this bird that the archers would select the grey pinion feathers with which to make the flights, or fletches, for their arrows.

By the end of the 14th century, the longbow was widely used by the English to whom archery was taught from an early age with a requirement that men and boys practised their skills after church service each Sunday. The result was that the bowmen of the English armies were instrumental in achieving astonishing victories against great odds at Crecy in 1346 and Agincourt in 1415. On both occasions, the steadiness and accuracy of the English archers destroyed the cavalry of French armies and altered the course of history.